My Husband & our kids are Indigenous Australians but most of MY family immigrated just prior to WWI from Germany, Ireland & Scotland. Yep, I’m white. In high school we were called ‘skips’. In honour of Skippy the Bush Kangaroo, I guess.

The 26th of January marks the raising of the Union Jack in Sydney Cove. This is when the British officially declared sovereignty over Australia & took control of the land – by any means necessary.

To me Australia Day has been about celebrating freedom & enjoying family & friends. It has been about looking towards a future where everyone is given equal opportunities. Where feelings about ‘Invasion’ are healed by positive relationships between all Australians. I believe this can be accomplished by raising our kids to be respectful, educated & caring people not hampered by the guilt, hurt & damage of past wrong doings for which they cannot & should not be held accountable.

The government & it’s citizens have all said ‘Sorry’. Even those of us that weren’t living here. Those of us who joined Australia, after those times, have said (& whole heartedly felt) Sorry. Perhaps the anniversary of that day would be a better choice for Australia Day?

I do not mind what date Australia Day falls on. The date has no meaning to me. The date does not form part of my ethos surrounding the wonder & excitement that is & has always been Australia Day. It has simply meant a day to spend together. Together as a family, as a country; united. But for some it has great meaning. It’s the day their whole future was changed & their worlds turned upside down. 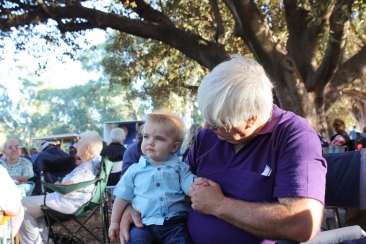 Almost every town in Australia has some sort of Australia Day tradition. Where I grew up you got up at 6am & threw the deck chairs, blanket & Esky in the car & made your way to the park by the river under the Morton Bay Fig Trees (yep, they’re native & they’re beautiful) for a gold-coin-donation breakfast provided by the local Rotary & Apex clubs. There were games like ‘dunny races’ & performances by children’s choirs & Indigenous Australian dancers. They gave out citizen awards & the Mayor talked about the future of the town. We stood up for the National Anthem under two flags: the Australian & the Indigenous Australian. I never could understand why there were two flags instead of one, but I just accepted it.

Just accepting it as the ‘way it is’ does not work for me anymore. I often state (tongue in cheek) “as the mother of Indigenous children…” However, in this instance I am not joking. I believe it is well overdue time to unite. To let go. Not to forget but to heal the past by moving toward a future united. To teach our children about a world where we can live without the guilt of our ancestors but of the love & compassion they had for this land, all land. For the desire for freedom that we all have. Even those of us who are white love this land & feel a deep connection to it. It’s where I was born, raised & gave birth to my own children. It is home.

So, if you must, change the date. It does not affect the feeling, the ‘vibe’ of the day for me. But it will for some. And if moving the date helps ALL Australians, Indigenous or otherwise, enjoy their day of unity, harmony & freedom then do it, I say. Do it.

Let me know what you think... Cancel reply